Microsoft is transitioning its Office program from a one-time purchase price to a paid monthly rate. One of the advantages of the new payment structure is the ability to always have access to the latest Microsoft Office update, without ever having to pay for an upgrade. If you’ve been wondering about the value in this, you may be interested to hear about a recent Microsoft Excel update. With version: 16.0.6568.2025, released in February 2016, Excel now includes six new functions. I know I’ll definitely be using some of these in the future! Here’s a quick breakdown of the new functions the Microsoft Excel update. 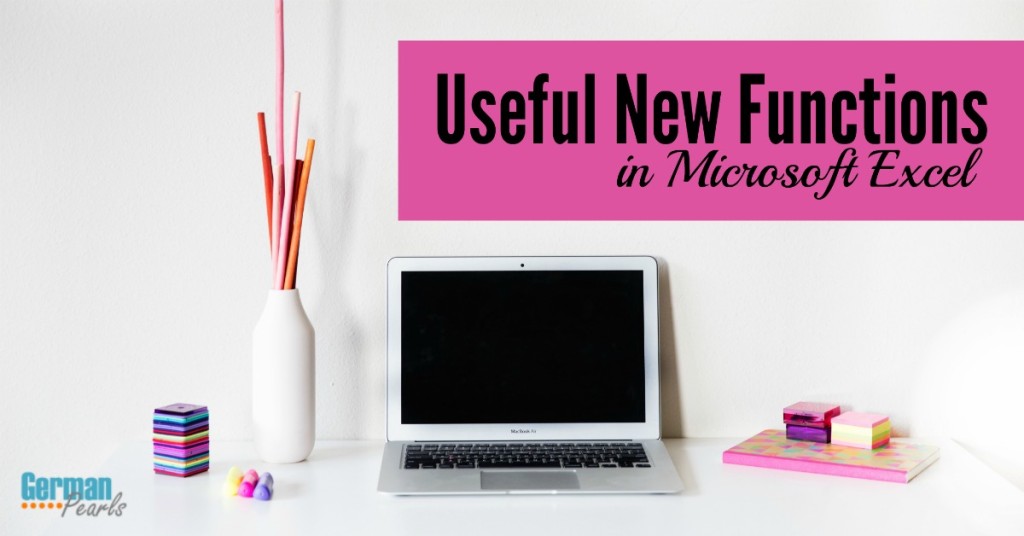 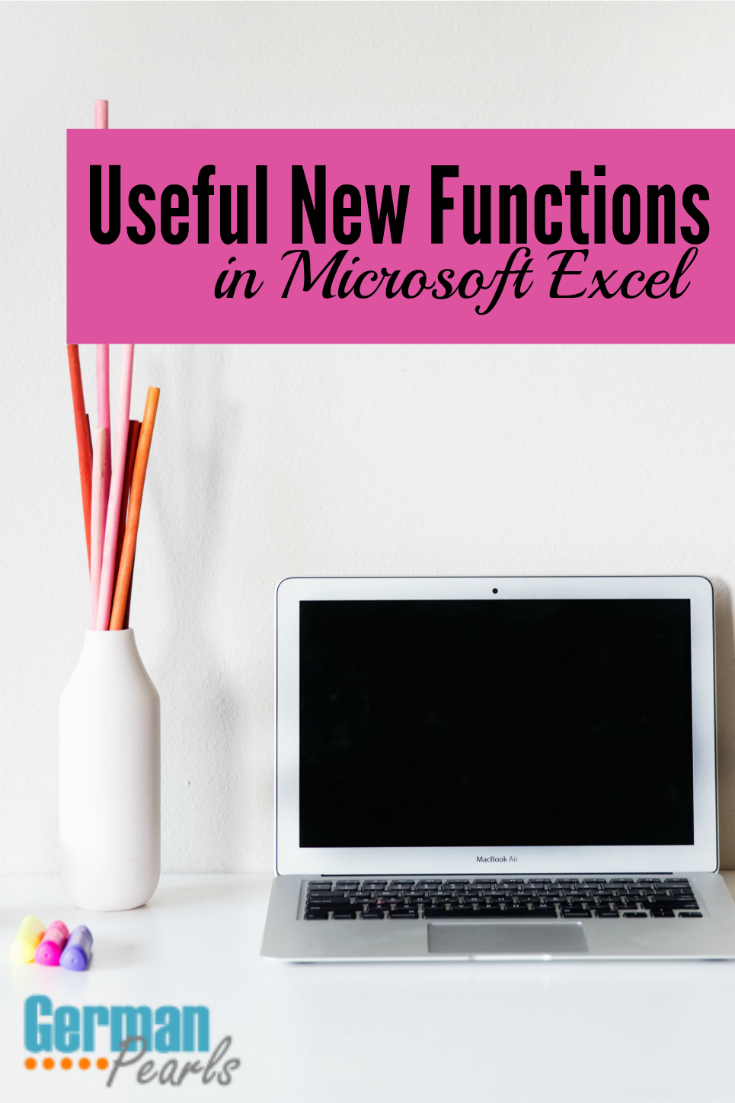 In a previous post we showed you how to combine cells in Microsoft Excel. The new CONCAT function will also combine (or concatenate) cells.

=CONCAT(item1, item2,…)
To use the CONCAT formula you type =CONCAT and then, in parentheses, add the items you want to join together. The items you add can be cells, text or a mix and should be separated by commas.

The TEXTJOIN function is similar to the new CONCAT function but it adds a delimiter (a character you specify) in between the items you’re joining. If you want to join several words but want a space in between each one the space would be your delimiter. Some other common delimiters are a comma (,), a comma with a space after it (, ) and an ampersand (&). In addition to having to specify what you’d like to use as a delimiter you also have to tell Excel how you want it to handle empty cells. Do you want to add the delimiter and an empty space or skip over it completely? Let’s look at a few examples.

If you’ve ever used a nested if statement as shown here on the MBA Excel blog, you’ll be happy to learn about this new formula in the Microsoft Excel update called IFS. IFS is way to create an if/then function with multiple if statements. 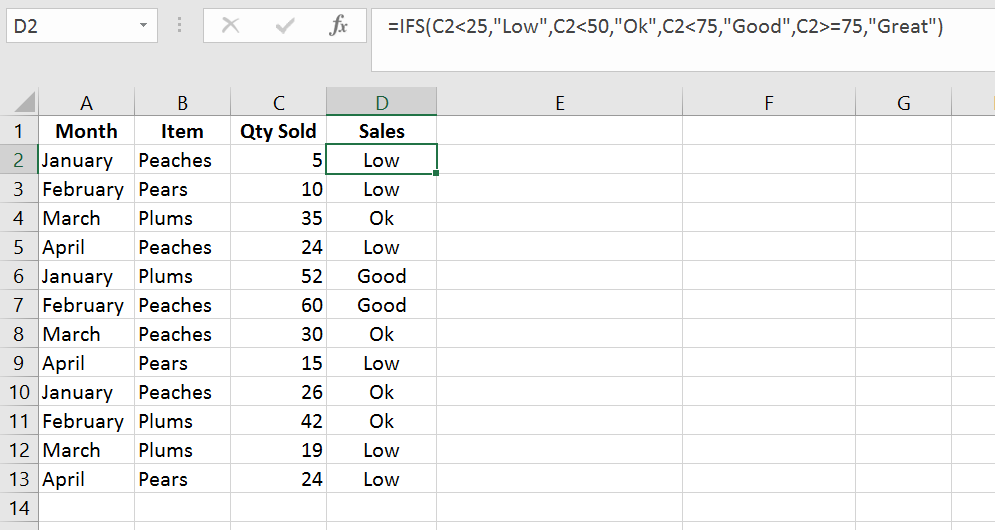 The new SWITCH function in Excel allows you to compare an expression against several values and return a result corresponding to the matching value. This may sound a bit confusing but should be clearer in the example below.

=SWITCH(evaluate_range,criteria1,result1,criteria2,result2,…)
To use the SWITCH function you write =SWITCH and then, in parentheses, write the expression you are evaluating followed by the value and result to return if the expression matches this value, separated by commas. You can then add additional values/results separated by commas. After you’ve entered all your value/results combinations you can also add a default result if none of the values match. (The default result is optional.)

In the example below we use the SWITCH formula to change the month name to a number (note there are other ways of doing this using the LINK format function). The function used is:
=SWITCH(A2,”January”,1,”February”,2,”March”,3,”April”,4,”May”,5,”June”,6,”July”,7,”August”,8,”September”,9,”October”,10,”November”,11,”December”,12,”???”)
Note that the month word is text so is placed in quotation marks but the result we want returned is a number so we don’t need to enclose the results in quotation marks. Also note that we want the cell to display ??? when no match could be found. This allows us to quickly check for errors in a large document.

If you’ve used the MAXIF function before you’ve probably ran into an occasion where you wanted to reference more than one criteria. You used to have to create a formula like the one found on the contextures blog to achieve your result. Now the MAXIFS function allows you to use several if criteria. The example below shows you how to use the MAXIFS formula.

In our spreadsheet example we use the MAXIFS function to evaluate the maximum number of peaches that were ever sold in January. The expression we use is:
=MAXIFS(C2:C13,A2:A13,”January”,B2:B13,”Peaches”)
Note that the first thing entered in the parentheses is the range C2 through C13. This is the range that contains the maximum number we want to find. Next we enter the first range we want evaluated, A2:A13 and the criteria for that range, “January”. (Note that January is enclosed in quotation marks because it is text.) Then, after another comma, we enter the next range, B2 through B13 and the criteria to evaluate against, “Peaches”.

Similar to the MAXIFS function the MINIFS function can evaluate a range for a minimum value when corresponding ranges meet specified criteria.

Using the same example as above we can evaluate the minimum number of peaches sold in January with the formula:
=MINIFS(C2:C13,A2:A13,”January”,B2:B13,”Peaches”)
The formula is the same as above except the function MINIFS is referenced at the beginning.

With quite a frugal personality I had a hard time accepting the idea of paying monthly for Microsoft Office. The benefit of always having the latest upgrade didn’t seem significant to me. After all, I can get on a computer running Office 2007 and still work fine. However, now that I have seen some the recent upgrades and these new functions in the Microsoft Excel update I’m glad to be on the Microsoft Office 365 plan

. I know I’ll be using some of the functions above pretty regularly. If you have the latest Office check these out. If you have any difficulty using them leave a comment below so we can help out!