You are here: Home / Microsoft Windows and Office / 56 Helpful Keyboard Shortcuts for Windows

When did stuff stop coming with users manuals? (Probably when everyone stopped reading them! 🙂 ) Well, I guess there are users manuals for Microsoft Windows and Office but they’re online. And, still, nobody probably reads them (including me).  But, there are some valuable tidbits hidden in all those instructions, including keyboard shortcuts that can help make you work faster and more efficiently.  So, instead of making you dig through all those manuals we compiled a list of some of the more helpful Microsoft Office and Windows keyboard shortcuts for your quick reference.  We also put together a quick cheat sheet of these windows shortcut keys that you can print out for reference.

Note: The list below includes shortcuts for Windows 10 but many also work on previous versions of Windows and Office. 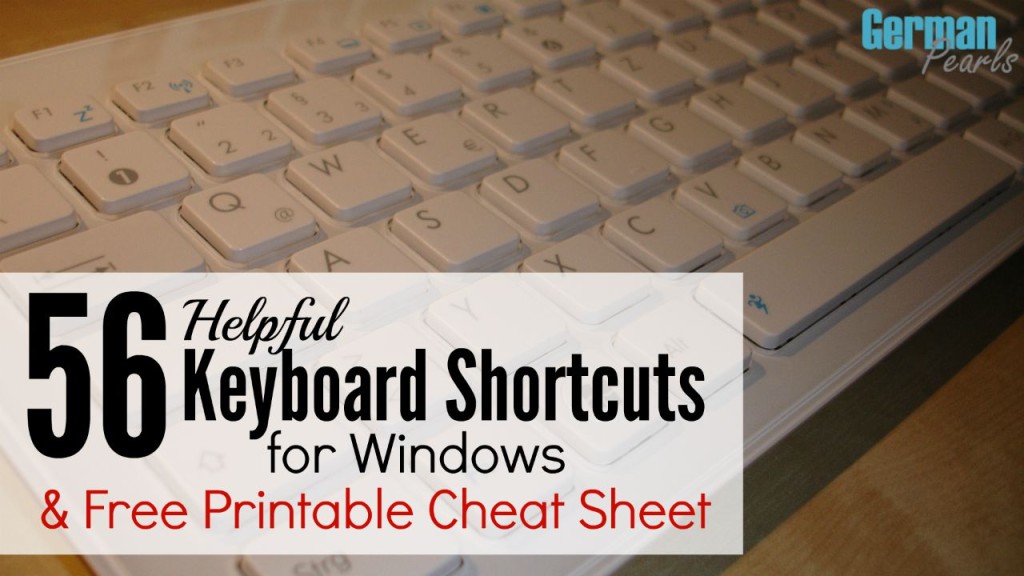 The shortcut keys listed below work in Windows and are used for accessing Windows settings and computer controls.

Shortcuts to Control your Display and Active Windows

Windows was named after its capability for allowing users to have multiple applications, or windows, open at the same time on their computer.  With newer versions of Windows, Microsoft has enhanced that capability by allowing us to resize and re-position the windows for easier access to multiple programs at once.  You can accomplish this re-sizing and re-positioning with your mouse but these keyboard shortcuts make it much faster.

Shortcuts to Control Your Apps Pinned to the Taskbar

Pinning apps and applications to your taskbar shouldn’t be anything new to most users.  But, these shortcuts may be eye-opening.  You can open and switch to those favorite apps of yours using some keyboard shortcuts listed below.  Just use the position they are in on your taskbar in the shortcuts below.  (For example, to use these shortcuts to open the 2nd app in your taskbar, use the number 2 with the following shortcuts.)

Here is a list of oldies but goodies.  These shortcuts can be used throughout most Microsoft Windows and Office programs (and usually beyond) and are, therefore, extremely helpful.

There are more shortcuts listed by Microsoft on their reference page but the ones above are probably the most helpful for the common computer user.  So helpful, in fact, that we’ve created a printable cheat sheet you can keep by your computer for reference.  We’re giving away this printable to all of our email members.  To receive your keyboard shortcut cheat sheet simply sign up below to download a free copy.